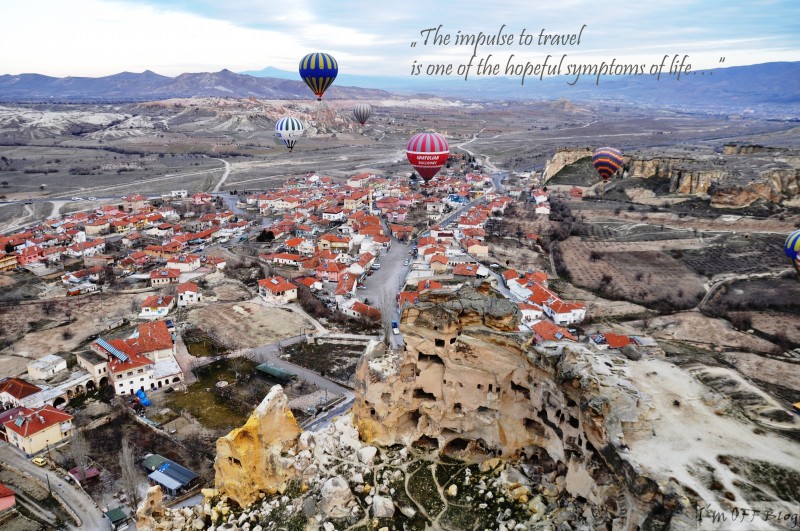 Cappadocia – it is Turkey that I have not been familiar with so far. In general, Turkey is always associated with Antalya, Alanya, all inclusive hotels or Istanbul, thus when I went on a trip to Cappadocia, I was taken completely by surprise by this region. Seven-day trip at the turn of January and February turned out to be a jackpot. During this period, there is almost no tourists in Turkey, and the weather is perfect for exploring. For the first time since a long time I went on a package trip with fifty senior citizens who, to my surprise, turned out to be quite good companions ;).

Cappadocia stands out for its exceptional rock formations (the so-called fairy chimneys) and carved out churches and monasteries. In the list of the most important Cappadocia tourist attractions are also underground cities in which for centuries local people were hiding against invasions and persecution. Kaymakh and Derinkuyu are the best known underground cities, but there are many more. Probably some of them are yet to be discovered… To this day, in some caves there live people, and in tourist resorts some of them have been transformed into hotels. You should also visit the rock-cut Church in Goreme and watch dancing dervishes. Unfortunately, I have to admit that this dance (with respect to the whole Turkish culture) made me fall asleep and, to top it all, I wasn’t the only one – the whole room was asleep… This magical land looks especially impressive from bird’s eye view, which we can admire during… a hot air balloon flight! If you ever decide to visit Cappadocia, a balloon flight is a must; it’s like the Eiffel Tower in Paris. This is not a cheap attraction but it’s worth your money. Balloon flight starts early in the morning, more or less about 5 am. Despite my fear of heights, my doubts were quickly dispelled when I saw this marvelous scenery in the light of the rising sun. Silence, calmness, everyone with mouth opened with delight. An unforgettable experience.